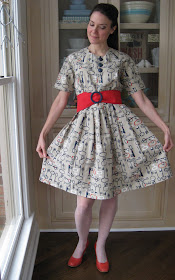 Me trying to look 1950's domestic. Don't let the bowls and cookbooks in the background fool you -- I only bought them to match the decor.

Okay, I am totally prone to bragging, so let me just say this and get it out of my system and then I promise to not bring it up again for another 10 seconds: I MADE THIS DRESS! I know, I can't believe it either. Probably because it's only partically true. Ahem, lemme correct myself: I MADE THIS DRESS WITH THE HELP OF MY GREAT FRIEND DEBBIE (and by "help" I mean she did all of the hard, incomprehensible, rocket science-esque parts). 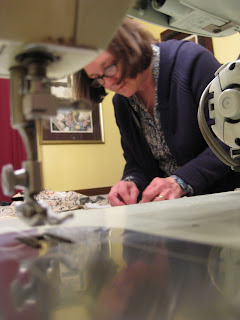 Speaking of, here she is workin' hard while I snap artsy photos and drink yet another of her delicious vodka, pomegranate and lime juice concoctions. She could really go in the cocktail biz.

Debbie and I have been planning our weekend of Memphis Craft for-evuh. I drove there right after school on Friday (while listening to Shudder Island on tape...yikes!...it got so spooky in some parts that I noticed myself driving slower and slower down the highway, even jumping when the CD accidentally skipped) and after a hot bowl of steamy soup and some delish cornbread, we jumped right in to the making of this dress: 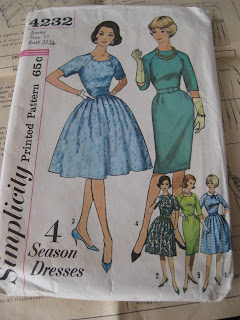 Next on my fashion agenda: Bring back the dish-washing gloves with bangles look. Tres chic!

It's a pattern from the late 1950's/early 1960's that I found thrifting. This is my favorite era of dress and I've accumulated quite the stash of these kind of patterns. I have always wanted to sew from  them...but having never been very successful with patterns, following directions or anything that involves concentration and brain power, I've never tried...until now (please read last two words in your best James Earl Jones voice). 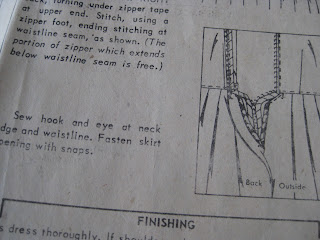 This portion of the pattern even stumped Debbie, though only temporarily. Notice the italicized writing: The portion of zipper which extends below waistline seam is free. That's right, a Free Zipper. Hangin' loose, free as a bird.

So following a pattern wasn't as impossible as I'd always thought, but it's definitely time consuming. I mean, the dresses from that era were no one-hour-and-then-you're-done affairs. They involved a lot time, focus and attention to detail. You know, the stuff my dresses from Forever21 seem to be lacking. We managed to knock out all hard parts which left me to finish the hem, the sleeve hem, buttons and belt. Oh! And the Butt-Tickler! 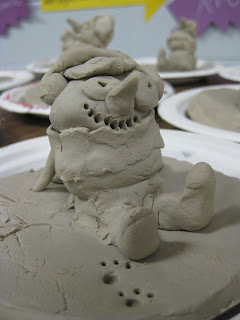 One of my kindergartener's clay snowman, sculpted in a 1/2 hour, thank you very much. I dare say all of these snowman brought us the good luck of a SNOW DAY!

Thankfully, I have the good fortune of a snow day today! With my time, I checked all of those dress to-do's off my list. Except for the dangling, butt-tickling zipper...I think I might keep that for a while!
Thanks again, Debbie and fam for having me! I had the best time...