In the Art Room: The Magritte Project, Two 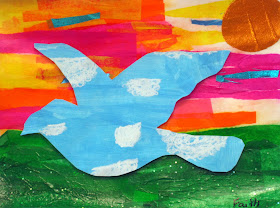 I'm sure ya'll remember that Mammoth-Magritte-Mural I previously rambled about (I mean, you'd have to unless you suffer from short-term memory loss. Which sometimes I worry that I do. I mean, I know everyone says, "oh, I walked into this room and totally forgot what I came for," but I'll drive all the way to the grocery store, stock up on moisturizer and People magazines and totally forget food. Pretty sure if I try to serve hubs Pasta a la Aveeno one more time, he's gonna demand I start taking my meds...again.)

Speaking of short term memory...what was I just talking about?! 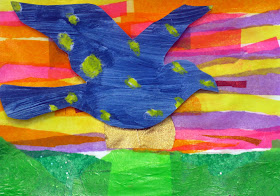 Ah, yes, Magritte. I do remember I told you that this particular project is like the gift that keeps on giving. Because after the kids cut out their day and night birds (go here if you are confused), it turns out I only needed one for their mural. Any more and it woulda looked like a scene outta Hitchcock's The Birds. This left them with either a cloud-filled or star-studded bird for the project you see here. 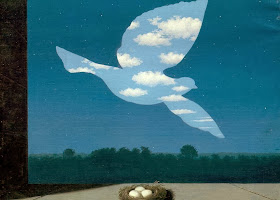 Magritte's The Return was the inspiration behind these small works of art. And, by small, I mean the paper was 9" X 12". We usually work twice as large in the art room despite our half an hour art class time constraints. But I had a sneaky suspicion that this whole tissue-paper collage thing just might take for-evah. Turns out, like sooo many things, I was right (hubs, are you reading this?! Say it with me: I. Was. Right. I know this has nothing to do with you, I just like to hear you say it!). 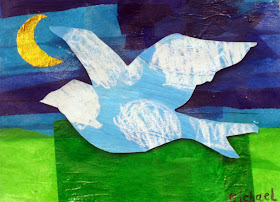 This spin-off project turned out to be a hit with the kids. They learned about analogous colors, creating contrast, making a collage landscape all while working with an art material they'd not used in a long time: tissue paper. Lemme tell they went about creating these works of art.

Bonus: You'll hear the story about how a third grader taught me the correct name of my favorite art supply. Deep stuff, I know. Read on. 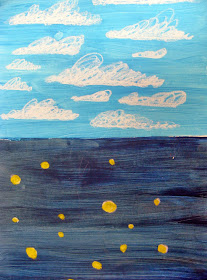 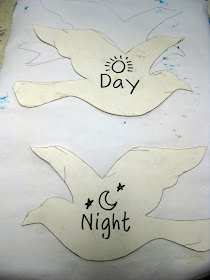 In my last post, I told you about how the kids were given 12" X 18" pieces of paper on which they were to paint a tint of blue and a shade of blue. These colors were premixed so that the colors in our mural would be consistent. I know, I'm a control freak. Once those were dried, the kids added clouds and stars in oil pastel. From there, they flipped their paintings over and traced the day and night bird templates on the back. This yielded two birds, one for the mural, one for this project, and an awesome negative paper to be used in the future. 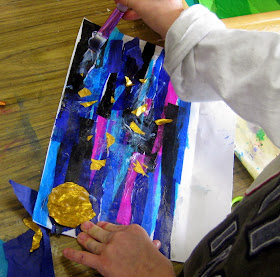 ACK!! I must pause this post and tell you why this scene made my hands sweat and caused the following convo:

Me: WHERE IS YOUR MESSY MAT?!
Kid: Um. My what?
Me: YOUR. MESSY. MAT. You're getting Modge Podge all over the table.
Kid: Oh, sorry...(attempting a distraction technique) but don't you like my beautiful nighttime sky?

Yeah, I do. Le sigh. Those kids. They get me everytime.

On the first day of this project, we looked at Magritte's The Return and had a long chat about two things: contract and analogous colors. We noticed how Magritte used a contrasting sky to make his bird stand out. Then we talked about ways we could do that in our sky without making just a blue daytime or black nighttime sky. This led to a chat about the different times of day and the colors you might see. Then I focused on the color wheel. I told the kids that they were to choose four pieces of tissue paper that were analogous in color. I placed a color wheel on each table to help them along. Once their four colors were chosen, they were to hold the tissue paper up in the air so the rest of us could see what they'd chosen and decide if there were indeed analogous. From there, they commenced tearing the paper into strips.
Now, just a note on that. I noticed that the paper has a grain. Meaning it will tear in nice long strips going one way, but the other direction it tears in short pieces. There is no way to know the grain, it's just a matter of tearing. Torn pieces of tissue were kept in labeled envelopes for the next class.

And a note on adhering the tissue paper. I asked that the paper go horizontally as clouds would move across the sky. I demonstrated how to apply a thin layer of varnish to the paper, place tissue on top and then apply another layer. When applying second layer, start in the middle of the tissue paper and brush outward. This prevents those annoying and unsightly crumpled pieces of tissue paper. 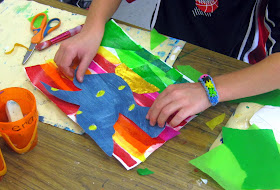 EEK.  Yet another cringe-worthy photo: scissors dangerously close to varnish brush...paper waaay off the messy mat...one of those rubber band bracelets that are going to be the end of meeee. Deep breath, focusing on lovely work of art. Whew. Okay. Better now. Back to whatever I was rambling about...

I had folded the paper so there was about 2-3" at the bottom for the horizon line. Once their sky was complete, the kids could dive into my massive box of sparkly fabric and create stars, a moon or a sun and clouds. This was applied in the same manner as the tissue paper. By the second art class, most skies were complete.

For the land, the kids were to choose two different colors of green (a couple even opted for green fabric), tear into large pieces and adhere to the bottom. This took them no time at all. 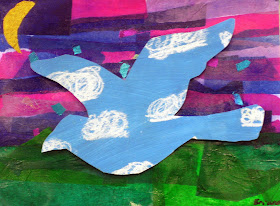 Once their landscape was complete, the kids were to glue their birds. I had them play around with the placement of the bird until they settled on a composition they liked. For a little pop, I used my paper cutter to slice a million little pieces of foam core. The kids glued about 5 pieces of foam core to the back of their bird and then glued that to their piece. I love the subtle 3-D element and it also introduced the concept of relief sculpture to the kids. 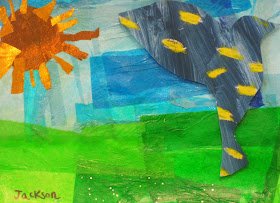 Now I know some of ya'll are stick-sun haters but how you gonna hate on this? 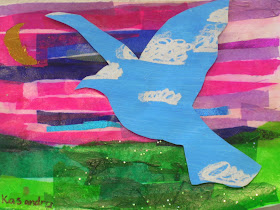 And now for a moment of art teacher humiliation. As if that doesn't happen about a dozen-twenty times in a day...

Kid: Mrs. Stephens, why do you call that stuff "Modge Podge"?
Me: (holding up the jug of stuff so the kid could see the label) Because that's what it's called, see?
Kid: Then why does it say MOD Podge?!

Wait, WHAT?!
And that's when my teeny-tiny brain was blown. I looked at the label and, sure enough, the stuff that I'd been calling Modge Podge for years is indeed called MOD Podge. Wah-hut?! How in the world did I not catch that? It's toootally got that rad 1960's mod-style label.

Please, puh-lease tell me I'm not the only one that's been calling it that. And please tell me why none of yous never corrected me on my ignorance? Have all ya'll been laughin at me (more than normal) behind my illiterate back?! JUST as I suspected, humph! 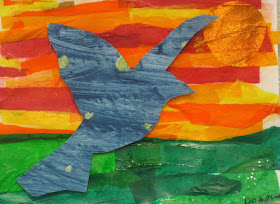 Whatevers. This Thanksgiving, I'm placing MOD Podge on the long list of things I'm thankful for...my lack of reading skillz, not so much.

Speaking of, I hope you have a wonderful Thanksgiving, friends! And, if you don't celebrate such, just pat your bottle of Mod Podge fondly on the head and think of me. I'll be back soonish with an embroidery project I'm just Thankful to be finished with.

Until then, have a great one!
cassie stephens at Tuesday, November 26, 2013
Share