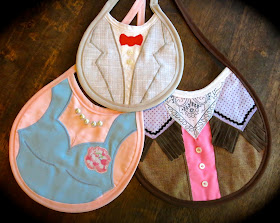 Well hey there, kids! Just when you thought I was done talkin' your ear off about that Pee-Wee Herman Baby Shower, I hit ya with another round of the Playhouse, this time in the form of a trifecta of Pee-Wee's Playhouse bibs! 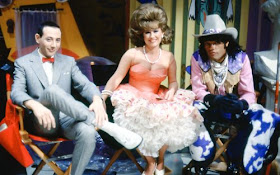 Modeled after my three fave characters from Pee-Wee's Playhouse: Pee-Wee, Miss Yvonne and Cowboy Curtis. Look at 'em just chillin on the set. Better yet, catch all three of 'em, along with the rest of the Playhouse gang, in this montage which contains all the totally inappropriate-for-children/sexual innuendos that aired every Saturday morning for all the under-10 set to see: 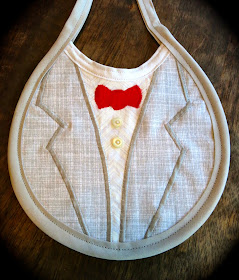 Now, I'll admit, I decided to stitch up these bad boys for Mallory in the final hours of Pee-Wee-party-preparations. When I get a crazy idea like this that I know I don't really have time to do, I immediately dive right in before that logical party-pooper part of my brain wakes up to my antics and is all, "WHAT are you doing NOW?! No time to wash your hair today but make Pee-Wee Bibs, suuuuuure!" Like I said, total party-pooper. 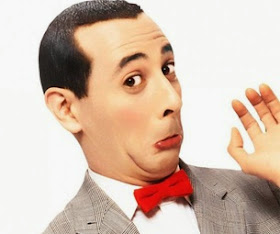 In making the Pee-Wee bib, I knew I needed light gray, white and red fabric. The best part about this here DIY is that I just so happened to have all the supplies on hand. Even that fringe for the Cowboy Curtis bib. Ah, the perks of being a hoarder. 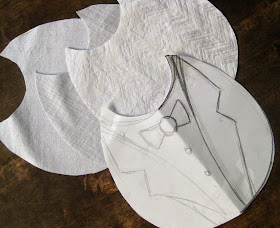 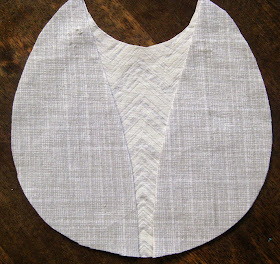 From there, I cut up my paper pattern and pinned the suit jacket portion to the gray fabric and commenced cuttin'. 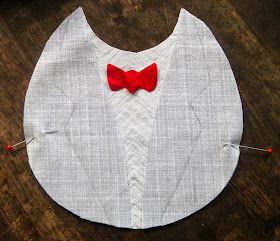 Pee-Wee's bow tie is actually the size of a child's tie, it's comically tiny. I tried to create one that little even though I knew stitching that would be a drag. 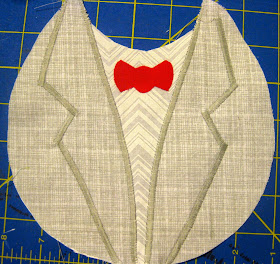 Once everything was pinned in place, I set my sewing machine to the appliqué stitch (your machine has it, it's the zig-zag setting with the width of the stitches set close together) and got to work. I decided to piece the bibs together first and then add the binding last...mostly because I had no idea how I was gonna do the binding and making the characters was just so fun I didn't wanna stop to figure it out! 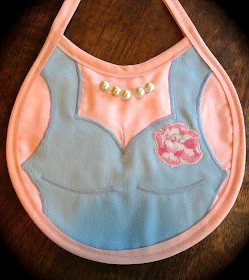 A thought I never thought I'd thunk came to mind as I was working on this bib:

Is cleavage on a baby bib a bad thing?

Answer: Not if you're making a Miss Yvonne bib! 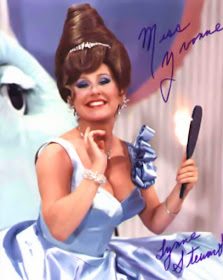 Now originally, I was just gonna make a Pee-Wee bib. But when I was finished, I realized I'd made it a pee-wee-sized Pee-Wee bib. So I decided to create a set of bibs each one slightly bigger than the last. So the next size up (so to speak) was the Miss Yvonne bib! 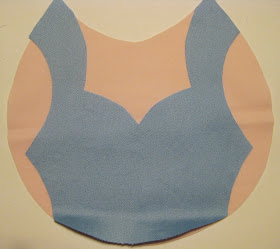 Oh man did I crack myself up with this bib, ya'll. Again, I started with a symmetrically drawn pattern,  pinned that to my fabrics and cut. I decided to add a wee flower to jazz up her dress some. The pearl necklace was made outta buttons that are a definite safety issue...but I'm pretty sure Baby Mama Mallory isn't gonna have her kid in a cleavage bib anytime soon. 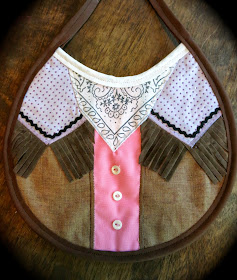 Well, howdy, ya'll! I think Cowboy Curtis was just the sweetest character on Pee-Wee's Playhouse. Always well-mannered and fabulously dressed. Hubs was a little ticked that I chopped up his favorite bandana but 'twas a good cause. This baby bib be pimpin Cowboy Curtis style. 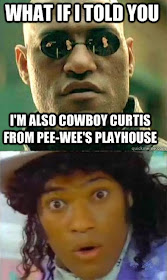 I know, Cowboy Curtis. I'm just as surprised as you are! 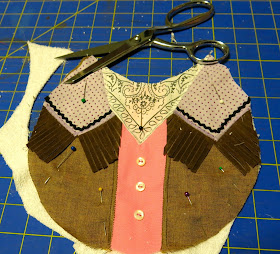 After each bib was complete, I pinned the terry cloth to the back. Then I stitched quilt binding to the top of each bib... 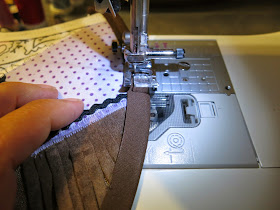 And a loooong band of it around the bottom. I left the ends of the binding extra long so they could be tied in the back. 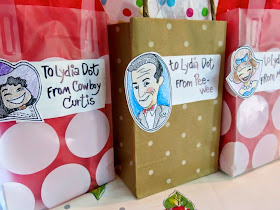 Of course each character bib had to come in it's own character package! I really couldn't resist. 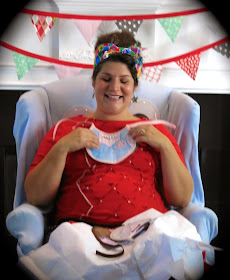 I tell ya, these bibs were just about the easiest and most fun to make. I mean, I was seriously giggling the entire time I was stitchin' em up. Course, I did have Pee-Wee's Playhouse playing in the background for inspirations so that certainly helped!

Alrightie, kids, that's the last of this Pee-Wee series...although I have a sneaky suspicion that there might be more Big Adventures to come (I so wanna Pee-Wee-ize my art room, ya'll!). Until we chat again, please be sure to cast your vote for our Artsy Book Club and have a great 4th of July weekend!
cassie stephens at Wednesday, July 02, 2014
Share