What the Art Teacher Wore #105 and an Orlando Vacay

Hey, friends! I trust ya'll had a super fantastical Independence Day (aka just-another-Friday for those of ya'll outside of the states). We're currently in the final hours of our Orlando vacation and, ya'll, it's been incredible. We've done Disney, hiked some trails, visited with fam and, best of all, got to experience Diagon Alley, the newest addition to the Wizarding World of Harry Potter at Universal Studios. I gotta warn you, if you plan on going to Universal anytime soon, this post is a serious spoiler, so go no future. But the whole experience was just so amazing, I just can't help sharing exactly One Million Photos of the place. It's just that nutz.

But before I get to all that, the Artsy Book Club winner is (can I get a drum roll? No? How about a Tootsie Roll? Thanks): Printmaking Unleashed! Yay, I'm so excited, I've already purchased my copy! I do hope it's a good one and offers a lotta new ideas for us. Now, for those of ya'll that are new to the Artsy Book Club train, here's how it works: Next Monday-ish, we'll begin dipping our artsy toes into the book. Please post on the Artsy Book Club page any printmaking projects that you attempt based on ideas in the book. This way we can all share ideas and thoughts together. If you can't get your kitten mittens on the book, no worries! You can still join the fun and post what you create. Ya'll! I'm so excited.

But Wait, There's More!
(do you know how many years I've had the blog and wanted to use that line?! Yearz, people.)
Many of you voted for Dave Burgess' Teach like a Pirate...and I've been meaning to restart that book for a while. So! I propose that if you had your artsy-heart set on that book, read it! Just like Printmaking Unleashed, we'll start plowing through chapter one of Teach like a Pirate next Monday-ish. What ya'll think? Who's in and whatcha reading? Can't wait to hear your thoughts and see your creations over at the Artsy Book Club!

Now, without any further jibbery-jab, let's take a look at these endless vacay photos, shall we? 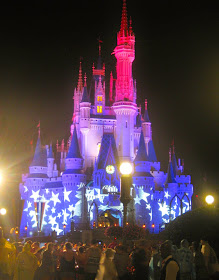 So the hubs and I arrived in Orlando last Thursday evening and zipped straight over to Disney World. Since it was close to closing time and there was a pretty ugly looking storm on the horizon, we thought for sure that the crowds would have died down and we'd be able to easily hope on some rides. 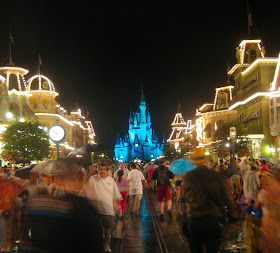 Whut in the World we were even thinking, ya'll? It's Dis-natch for crying out loud, The Happiest (and most crowdedest) Place on Earth! We did managed to squeeze in some Space and Thunder Mountain time but the throngs of people were just so throngy. One eve was enough. 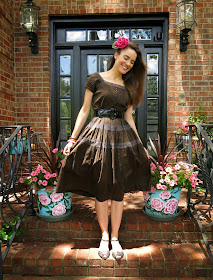 Sew Awesome Tuesday: A sweet sewing buddy of mine popped over Tuesday and after a lil lunch, we set to work chatting and stitching. She's working on the cutest apron ever and I'm in the midst of what I've dubbed the Fiesta Frock. Fingers crossed I finish it in time to share with ya'll next week. Sewing with a buddy -- such a fun way to spend a summer day. dress: vintage; sandals: Frye 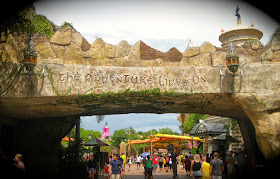 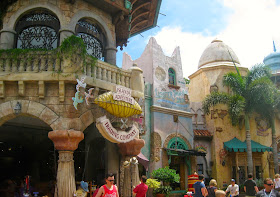 It's seriously been the inspiration behind the way I attempt to create the environment of my art room (I just read that sentence three times and it made no sense. Good luck to you, kind reader). I heard that Steven Spielberg himself helped in the design of the entrance and I can totally see that, can't you? 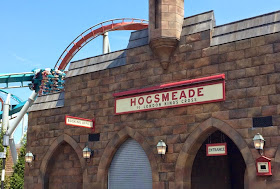 After a short walk through Seuss Landing and The Lost Continent, we entered the Wizarding World of Harry Potter and were super stoked to see that the Hogsmeade train station was open! The grand opening isn't for a coupla days so we got super lucky that the train was open and had a 10 minute wait time (just to give you an idea, they are expecting thousands of folks for the grand opening with wait times up to six hours!). We practically fell over each other boarding the train. 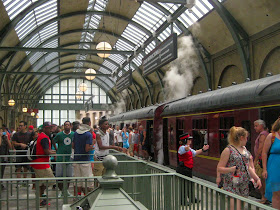 Now, I'm not so mean and rotten that I would ruin the train ride for you. If you are dying to know, I'm sure a short google search would land you video clips of the experience. However, lemme just say that Universal spared no expense and it went way beyond what I coulda imagined. And I'll just leave it at that. 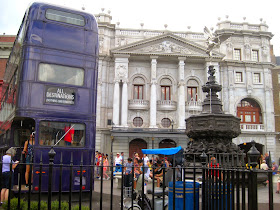 Our train ride delivered us to jolly ole England, chaps! Right in the heart of London to be exact. We strolled through this area taking in the sights and feeling a touch confused: Where in the world was Diagon Alley?! When we asked an employee, her response was perfect: "Diagon Alley? Hmm, I've never heard of it!" In the Harry Potter books, muggles (that'd be non-magical types) are unfamiliar with this magical place. In fact, there aren't even any signs on how to get there...but we managed to turn a corner and found it... 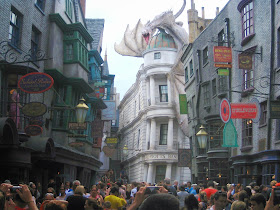 I know, right? We seriously just stood there with our jaws dropped. And then this happened... 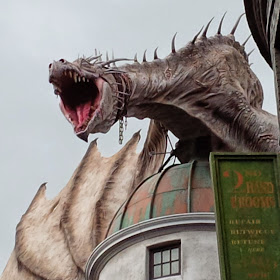 Ya'll. That dragon (sorry, Potter fans, I've not read the books much to the hubs' dismay, I'm unfamiliar with his name) is simply amazing. I do believe Mitch and I made about twelve video clips of him blowing fire between the two of us. 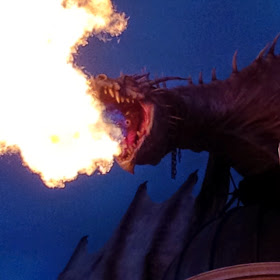 You could feel some serious heat when he did. My favorite part was that after every blast, the crowd went completely insane clapping and cheering. 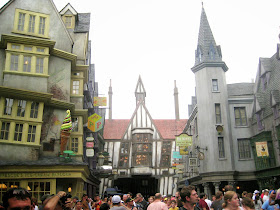 Don't let the name Diagon Alley fool you, this place was huge! And every bit of it was so creative that you could spend days (and we did!) just walking around and taking in the sights. Every couple of paces, there was a place for you to wave your wand (given that you picked one at the wand shop...or it picked you, as the story goes) and something magical would happen: a fountain would squirt you, it would rain, lights would flicker and full bodies of armor would come to life. 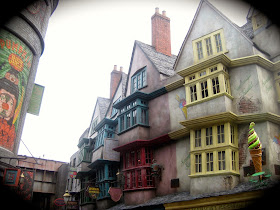 I did warn you of the excessive amounts of photos in this post, riiiiight?